Let me set up a scenario for you.

I’m wandering the rows of my local family-owned video rental store, just perusing the shelves for any title that may catch my eye.

It’s obviously a slow night. I hear the faint sounds of another customer lost in the aisles somewhere near the old war movies. The two girls behind the counter look like your everyday bored to death high-school students. But what’s this? Strolling through the front door, come two women, quite possibly a mother and daughter, in their 30’s and 50’s respectively. As they approach the teenagers behind the counter, it should be noted that there are now three generations of people convening together. They approach the counter and this is how the conversation plays out.

Customers: Do you have anything by Vincent Price?

Customers: No, a director. (STRIKE 2)

(I’m eavesdropping pretty hard at this point and every word exchanged is killing me a little inside.)

Clerks: Ok, let me check. *type type type* I don’t see anything under director, was he in Edward Scissorhands?

Me: Uhm, yeah he was. He was the Inventor. It was one of the last things he did before he died.

Clerks: Well sorry, that’s all we have.

Following this exchange, I checked out the "Horror" section to be greeted with a slew of Vincent Price classics, including (but not limited to) House on Haunted Hill, The Masque of the Red Death, The Bat, and House of Wax.

I don’t know why that bothered me, but it did. How could three generations of people be that oblivious to the existence of the great Vincent Price? Aside from his status as a legend of the horror film genre, he’s done plenty of “pop culture friendly” things to appease the masses.

He was on Hollywood Squares, he voiced Professor Ratigan in Disney’s (DISNEY’S) The Great Mouse Detective, he was in Tim Burton’s Edward Scissorhands, and he was the narrator of Michael Jackson’sFAMOUS Thriller video. Perhaps, even more important than that, he was on the freaking Muppet Show. Does it get any better than that? How could it?

See what I mean? Long story (very long story) short, the whole experience inspired me to make a poster of Vincent Price as a tribute to all of the great films that he made throughout his life, and of course, as a tribute to that famous mustache. 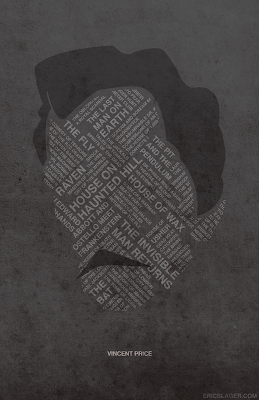 This post was featured on the two awesome horror genre sites Classic-Horror & Horror Society. Thanks guys!